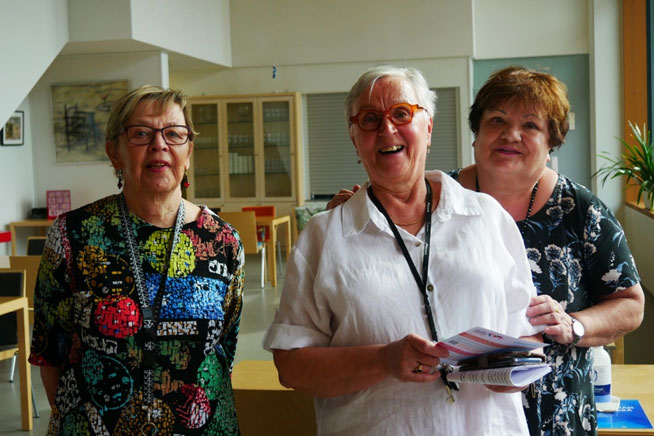 Finland is an unusual place where people consistently consider themselves to be the happiest in the world, where the ruling coalition is led by a group of five women, four of whom are under 40, and where public spending as a % of GDP is among the highest in Europe. For more about Finland’s unusual culture and how it came about, Danny Dorling’s Finntopia: What We Can Learn From the World’s Happiest Country is a must read.

In June 2022, we attended the European Social Housing Festival in Helsinki. One of the four days of the festival was dedicated to Collaborative Housing – Community Led Housing, as we know it – and we were presenting on our experience of partnerships between CLTs and RPs in a session with colleagues from Italy, Spain, Belgium and Ireland. But before and after the collaborative housing day, visits had been arranged to three community-led housing projects in the city. These visits will probably stay with us the longest of the many memories of Finland.

The visits were led by the extraordinary Salla Korpela. Salla is joint owner, with Susanne Vatanen, of Sagarak Oy, a technical support service for those wanting to live in cohousing projects. Literally translated, Sagarak Oy means Wise Women Building Ltd. It’s wisdom about human nature that drives Salla and Susanne’s work, as we found after the wonderful dinner laid on for about 100 of us after the last visit. Salla stood on a chair and gave this unscripted speech:

“I believe that spending an evening like this together, having dinner, telling stories, and sharing their lives and experiences is what I believe our brains are wired for because it is so deeply, deeply ingrained. This is what I believe. And also, I believe that the world is complicated and we have many challenges but we when live like this we remain strong; strong to face all kinds of challenges in the world such as climate change and any kind of social catastrophes. This is the way to do it. Modern development and urbanisation have the tendency to draw us apart from each other, but we have the means to bring ourselves together by joining like this, having dinner together, solving our problems together, and facing the challenge of life together. I am a woman of faith but not any religious dogma. My faith is in sharing – to bring a little bit of heaven on earth, and that this is the movement we all need to take further.”

This spirit of community is what the three cohousing projects were all about: Kotisatama, Sumppi and Malta House. All were completed within the last 10 years and range from 39 to 63 flats. They are for older people, although the minimum age is just 48. All have been built on land leased for 80 years from the City of Helsinki authority (which owns huge tracts of land). Each project is owned by a company in which the residents buy shares equivalent to the market value of their homes, less the land value which is retained by the City.

The initial residents were closely involved in the design of their projects – facilitated by Sagarak Oy – and the projects are run on cohousing principles. In the largest project, flats range in size from 37 to over 70m2 and there is 500m2 of common space, including the inevitable sauna (although some of the individual flats have saunas too).

Cleaning and cooking is almost all done by residents, organised democratically into 6 groups which each leads on a different aspect of life in the project. The level of organisation seems to have become more relaxed over time. One project started out with 3 communal meals a week and now has one every now and then, as the feeling in the house dictates. Opinions differ about rules: some like more, some like fewer. The general sense, though, going back to Salla’s wisdom, is that they overcome loneliness, reduce dependency on social care and contribute to the sense of well being in Finland.