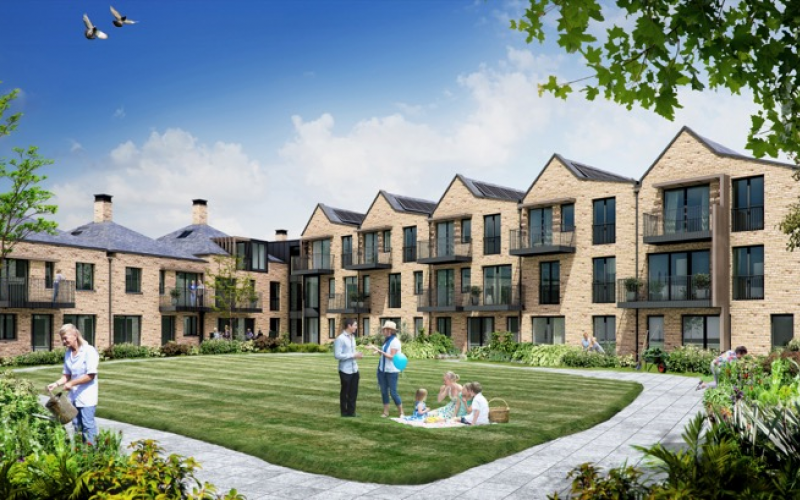 UKCN are delighted to announce that The Older Women’s Cohousing scheme, ‘New Ground Cohousing’, has won the prestigious Richard Feilden Housing Design award.  The scheme is due to be completed shortly in Union St, High Barnet, and was entered by its architects Pollard Thomas Edwards in the projects category.

The event, held on 11 July 2016, is a national partnership of government departments and major professional, housing and construction bodies connected to design.  There were some 205 entries, categorised as ‘completed’ or ‘projects’ with 15 design awards made overall.  The Richard Feilden award, established by the Homes & Communities Agency, is awarded in memory of the great housing architect Richard Feilden to a project that epitomises the values he brought to housing –  championing the common good, while being innovative and sustainable.

The OWCH building’s award was announced by Louise Wyman, from the Homes & Communities Agency, and one of the judges. She described her role in the HCA as delivering a new wave of garden cities – which have about 3 and a half years’ lead time to engender whole new communities. ‘Which is why this small project raises a wry smile because it began 18 years ago when a group of women formed Older Women’s Cohousing, better known by the great name of OWCH.’ She stressed how difficult it was to find affordable and desirable land in London, that the scheme is mixed tenure and that ‘a few years ago, Hanover took it under its wing, offering to fund and develop the homes both for rent and owner-occupation on a disused school site’ in Barnet. She congratulated OWCH, PTE and Hanover for the achievement.  ‘Intriguingly, the final hurdle to this project was the requirement to show Barnet Council how a group of ageing women could reduce the burden of care costs, an anxiety in a borough where more than 3 in 10 older people live alone and would really benefit from the interdependence planned for old age by OWCH’.   Besides being a design winner, this project is also a ground-breaking project in that it will soon become the first senior cohousing community in the UK.

Earlier in the day, in a seminar entitled ‘How far can communities shape their homes?’, our executive director, Anna Kear, Maria Brenton (UKCN Senior Cohousing Ambassador) and Patrick Devlin (PTEa) presented a brief account of cohousing, the OWCH project and the design process, which was very well received.  The architect Patrick Devlin outlined the collaborative and participative approach to the design he developed with members of the OWCH group – the outcome of which was eventually determined more by Barnet planners than the group, given the conservation area status of Union St. Nevertheless, Maria Brenton, OWCH project consultant, was able to highlight the hugely positive impact of the OWCH group’s involvement with the design from its earliest stage, something which cemented their links both to the cohousing project and to each other.

New Ground Cohousing are due to move in to their new home by the end of this summer and will then consolidate the community they have long dreamed and planned for.

Telegraph article: ‘Sixty, female and all living under one roof‘ – 19 August 2016